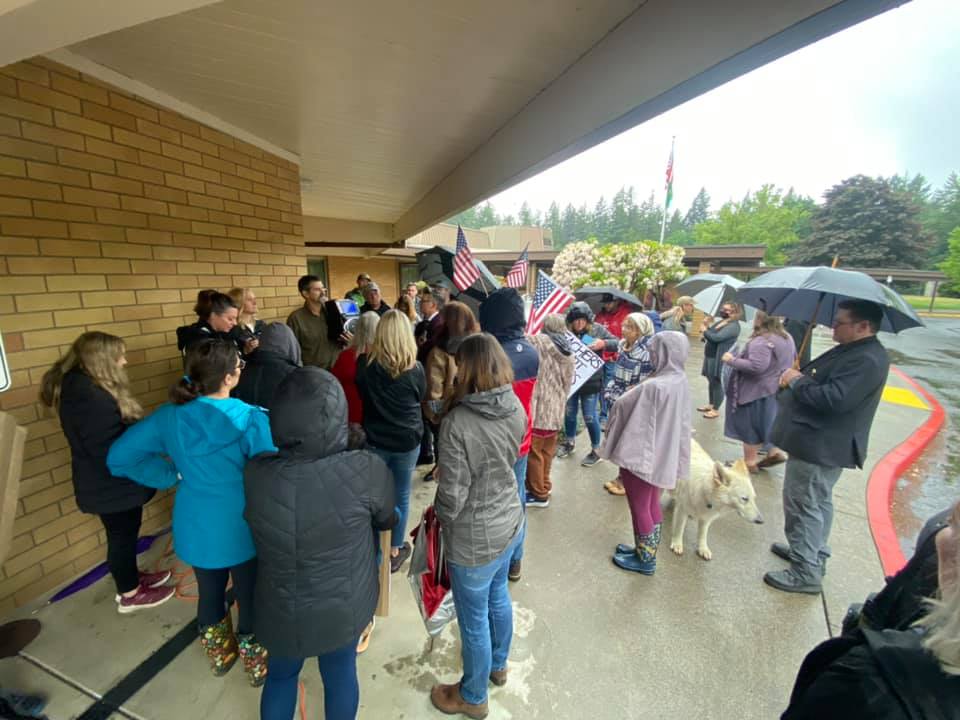 “2 weeks to flatten the curve” has now eclipsed the one-year mark. This much is certain, Camas and Washougal families are tired of the lock-downs and are demanding to have their voices heard.

Rain fell in typical Pacific Northwest fashion as people gathered to make their voices heard. However, the inclement weather did not dampen the spirits for the dozens of parents and concerned citizens who attended the peaceful assembly. Issues ranged from concerns over Critical Race Theory (CRT), the seemingly endless mask-mandates and the Camas School District’s COVID-19 vaccination policy. The evening was calm and peaceful, although emotions ran high for a brief moment, cooler heads prevailed. The community was united by frustration at the Camas, Wa school board that doesn’t want to listen. Conversations that night were seasoned with comments from people wearied by a year of endless lock-downs. Others were fearful of almost-nightly violent riots in nearby Portland. All seemed frustrated by masked children and months of tedious remote learning.

“We have been silenced…”

A few citizens noticed that certain speakers’ presentations to the school board were deleted and/or muted on the official video feed. One local resident, Kenric T, expressed his concerns over CRT principles being brought into the school’s curriculum only to realize after the fact that the school board had muted his microphone during part of his presentation and cropped his speech out of the district’s video upload of the meeting. Problematically, parents who questioned the wisdom of including CRT and the complex issues it raises were insulted as “racists” with little other explanation for their position given.

While parents at the assembly quoted civil rights leaders such as Martin Luther King Jr’s iconic I have a dream speech, detractors attempted to silence those who oppose CRT using strawman arguments, insults and unfounded accusations.

“I have a dream that my four little children will one day live in a nation where they will not be judged by the color of their skin but by the content of their character. Dr. Martin Luther King Jr.“

The controversy centers around CRT’s focus on race/racism as primary factors in the outcome of one’s life. While Martin Luther King dreamed of a world that did not judge people by their race, CRT makes almost every aspect of one’s life about race. Problematically, intelligent discourse on these emotionally-charged issues seems difficult. Those opposed to CRT often wade through a barrage of negative accusations and smear-tactics coming from some who favor social justice. Even worse still, the conversation seems locked into a false either/or dilemma. Parents feel that they’re not allowed to even question CRT without being labeled, silenced and perhaps canceled.


National media, Big Tech and government officials are all in lock-step on universal application of the new COVID inoculation. Despite this united front, some are still hesitate to take the as-yet experimental treatment. Several parents voiced concerns over what feels like an authoritarian push for citizens to obey without question. Typically, inoculations are given based on an individual’s risk of contracting a disease. For example, a person about to travel to the remote Amazon rain-forest may be advised to take several vaccines not generally given to people who live in the US. This is because a person exploring the tropical jungle has far different risk factors than someone residing and staying within the continental United States.

Parents at the Camas school board meeting argue that since children are at low risk for COVID, forcing children to be treated is uncalled for. The unknowns surrounding these new-to-market treatments offer more questions than answers. Furthermore, many protesters questioned the details of the inoculation’s “emergency approval” status. Normally, vaccines take 10-15 years to produce and safety test. In contrast, the recently released COVID treatment was developed in less than one year. Local community members fear that the rapid development and short testing period may have unforeseen consequences.

“2 weeks to flatten the curve” has now eclipsed the one-year mark. This much is certain, Camas and Washougal families are tired of the lock-downs and are demanding that the public school board have their voices heard.